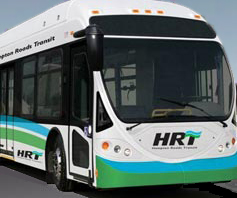 Hampton Roads Transit (HRT) was formed in 1999 as the result of the merger between Tidewater Regional Transit and Pentran, the two transit systems operating in the Hampton Roads region since the mid 1970s. HRT provides intermodal transportation to 1.3 million people in a service area of 370 square miles, and has nearly 1,000 employees.

With a steady rate of growth and plans for further expansion, HRT needed to replace its 25-year-old legacy financial and HR systems. Requirements included:

CherryRoad’s efforts helped HRT to: transition from a 25-year-old legacy system to an ERP Financials system; eliminate workaround and side-systems; and interface to a vital fleet and inventory management system. This was achieved on a very aggressive implementation schedule.

“Not only did CherryRoad create an incredibly smooth transition from our 25-year old legacy mainframe system to the most recent version of web-enabled Financials and HCM systems, they also completed the project on schedule and under budget.”

Hampton Roads Transit (HRT) engaged CherryRoad Technologies based on the firm’s strong experience with ERP implementations in the public sector as well as in the transit industry. “After evaluating several potential system integrators, we found that CherryRoad was the easiest to work with and they demonstrated a clear understanding of our business challenges,” said Michael S. Townes, CEO of Hampton Roads Transit. “CherryRoad has a strong track record of ERP implementations.”

A Pioneer – and an Aggressive Timeframe

HRT was one of the first organizations to implement an Internet-enabled ERP Financial system. In addition to the challenges of implementing a new release, HRT had no room for slippage in its implementation schedule. HRT stakeholders expected the system to be implemented by the new fiscal year, which was just five months away. CherryRoad approached the implementation in three phases:

These phases were achieved on a very aggressive time frame, and were completed within 14 months. The team met this tight time frame by dedicating resources, adhering to milestones, and minimizing customization. To help HRT employees adjust to the changes in their Human Capital Management system, CherryRoad worked with HRT on a communication strategy and plan. These communications informed the organization about project progress and introduced changes to come, such as the new look of employee paychecks.

The new ERP solution enables HRT to capture financial information more quickly and efficiently than before, and to perform ad-hoc reporting. The web-based functionality enables employees to access the solution from any workstation, so less workstation maintenance is required. Notable results of the implementation included improved functionality in procurement, cost and revenue allocations, commitment control, pension administration, and payroll interface.

A key improvement for HRT has been the implementation of the Purchasing and Procurement modules. HRT’s previous purchasing application did not interface well with its SPEAR system for fleet maintenance and inventory. If a part was required to repair a bus, HRT had to first check SPEAR to determine whether the part was in stock. Next, the staff had to separately input the same data into the purchasing system to order the part. The result was a great deal of paperwork and some errors, due to duplicate data entry.

The integration between HRT’s legacy purchasing and SPEAR systems was rarely functional. As a result, they entered all requisitions and purchase orders manually. In addition, the legacy purchasing system could not accommodate RFPs, and these procurements were made manually and completely outside the purchasing system. The opportunity for error was high with this labor-intensive process. CherryRoad worked with HRT to implement the Purchasing and Procurement systems, and to interface them with HRT’s SPEAR system. HRT now has a seamless procurement solution that interfaces smoothly with their fleet maintenance system.

HRT provides transit services to seven cities, and must allocate both expenses and revenues to all of them. The Finance Department previously followed an extremely elaborate allocation process, which entailed several different applications and took weeks to execute. For the most part, they worked outside their financial system. CherryRoad built an allocation process, utilizing the Allocation functionality in their General Ledger application. HRT can now execute the 129-step process within their General Ledger system in a much shorter period.

CherryRoad also helped HRT activate the Commitment Control functionality inherent in their applications. Previously, the process of notifying managers about their budget status was laborious and delayed. Often, there was a lag of several months before managers were notified of their budget balances. Since implementing the Commitment Control functions, HRT has been able to notify managers of budget encumbrances in a timely manner, significantly enhancing their ability to make informed purchasing decisions.

HRT needed its HR system to calculate pension benefits eligibility. Drawing on their background in Pension Administration, CherryRoad created functionality that derived the elements necessary to calculate a pension benefit, as well as stored the required information for pension recipients. The rules associated with deriving the calculation elements are table-driven, so any future changes would not require changes to the programs involved.

While implementing the new system, HRT was also implementing a new fixed-route scheduling and operator dispatch software system called HASTUS. Among other things, this system will record and track operator hours by payroll codes and absence codes. The new Payroll system was placed into production before the payroll tracking functions of HASTUS was complete; therefore, HRT needed an interim solution.

CherryRoad accelerated implementation of the Time and Labor module to coincide with the Payroll go-live, which enabled dispatchers to enter exception hours (unscheduled overtime and absences) directly into the system while HASTUS fed just the scheduled hours into Payroll. The permanent interface is due to go into production in October 2003 when HASTUS dispatch and payroll tracking functions are completely built and tested.

Through the HCM and Financials implementation, HRT has gained the key benefits it sought: real-time data organization-wide, streamlined data entry, enhanced security and controls, interfaces with its key transportation systems, and significantly enhanced Procurement functionality. “Not only did CherryRoad create an incredibly smooth transition from our 25-year old legacy mainframe system to the most recent version of web-enabled Financials and HCM systems, they also completed the project on schedule and under budget,” said Michael Townes.